I have a “Interactive Voice Response System (IVR)” I want to model.

I have attached a diagram to try to describe the issue I want to solve.

I have a data object that I thought could represent a dialog which is a series of audio prompts that are spoken.
I was think that the Call-out in pink can be the entire dialog that is spoken.
The Data object can represent the 4 audio files that make up the dialog.
The audio file attribute in the data object needs to have several attributes to it such as:

1 (filename). Audio_intro_english.wav
2 (text). “This callout is from the ‘Audio Prompt Dialog’ data object.
That data object has the following Properties:”

Then I want the call-out to link to the text (#2).
Then if I edit the audio entry in the data object, the call-out will automatically update.

Note, the data object and the call-out are not on the same layer as different users are viewing this same diagram. 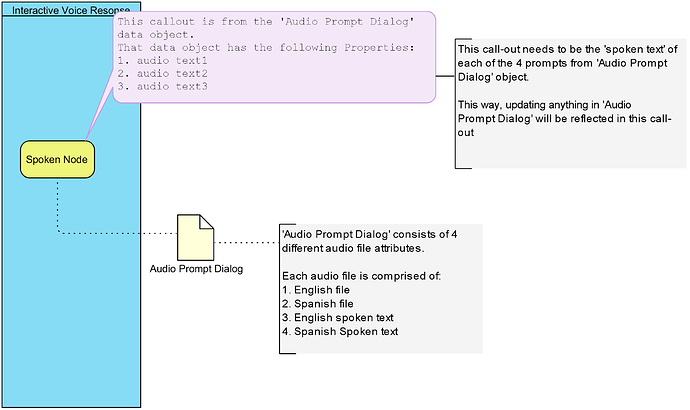