I’m using SDE-EC V 4.0 and tried to move some of my already created sequence diagrams from one VP project to another. So I started an XML-Export for these diagrams and then imported them in the target project. This caused the model being doubled and the root-folder of the model named like this NEWPROJECT(OLDPROJECT) .

What does it mean ?

It seems like diagrams have been moved but are applied to their own model that has been imported, too.

Thank you for help

Please try export the project file instead of XML. For details, please watch the movie at:
http://www.visual-paradigm.com/product/sde/ec/demos/interoperability/importexportvpp.jsp

thank you for quick help, it works but considering sequence diagrams this unfortunately didn’t excuse me from assigning the used classes (lifelines) and their methods (messages) to the model of the target project.

If I don’t do that my diagrams are not properly adjusted to the changed code after “ForceUpdateModel”.

Is there another way to solve this problem :?:

You said that it didn’t allow you to assign the used classes and their method after importing. Base on this, I carried out the following test, and find it working. Could you comment on my testing? I believe that I have made something wrong.

At this point, I am able to select foo(), which was defined in the exported project. (See masterProject2.png)

These steps outline my understanding to your problem. 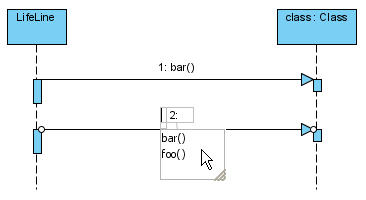 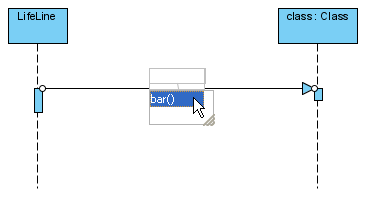 thanks for your reply. Hope I can explain it clearly now. What I did was:

Consider project B having a model containing also class “Foo” in package “bar”.

Then it imported the model “bar2.Foo” on which the imported diagram is based, but I wanted it to be based on “bar.Foo”.

When I afterwards change a method name in class “Foo” and perform “Force Update Model” on project B it is only changed in “bar.Foo” not in “bar2.Foo”.

So to have only one model and not to have this problem when updating the code, I have to change all the model assignments of the diagram elements especially for class “Foo” from “bar2.Foo” to “bar.Foo”, and after all delete the model “bar2.Foo”. This is what I want to avoid. Any idea :?:

You mentioned project B, which also contains the class “Foo” in package “bar”. Was project B exported from project A? If no, it is normal that the import won’t merge them together. Because they are considered as two models. In order to make the import merge things together, project B should be exported from the master project.