is what I’m getting in the HTML output

It’s probably something I’ve accidentally switched off as I’ve been playing around with the advanced options on the project publisher trying to slim down the html to the features I actually want to display. But no amount of tweaking seems to be able to switch those links back on.

The links are still visible (in html output) and working for the other diagram types I’m using (eg BPMN and Component). Its just the activity diagrams that no longer display or allow me to link.

Can someone please either tell me exactly which options need setting to make them work OR tell me how to reset all the advanced options back to the default where they’ve been until I started trying to slim down.

Please make sure you have turned on the Mark in shape when reference/sub-diagram/description/transition added option under the Advanced Options in Project Publisher is being turned on. Feel free to contact me for any questions and wish you have a good day!

No. It’s obviously a more serious problem than that. That box was already ticked.
Here are the screenshots for all the settings: 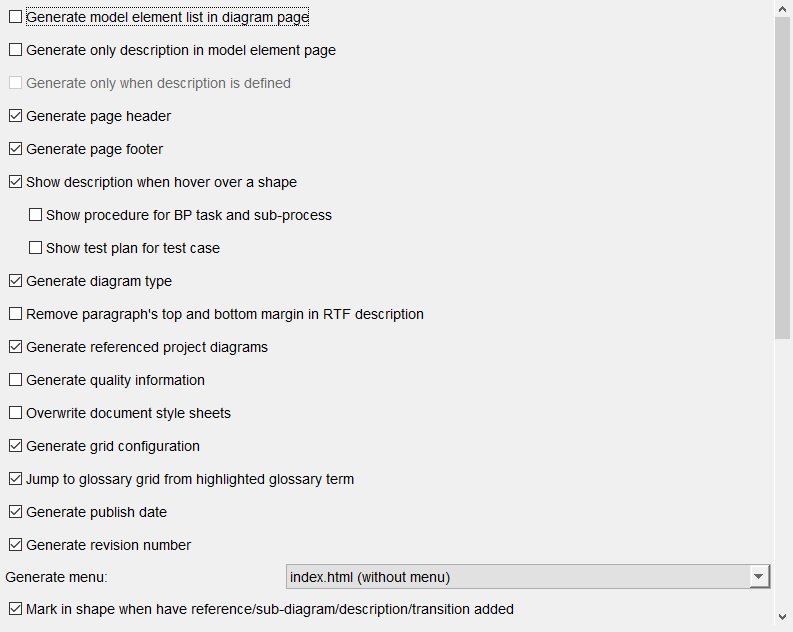 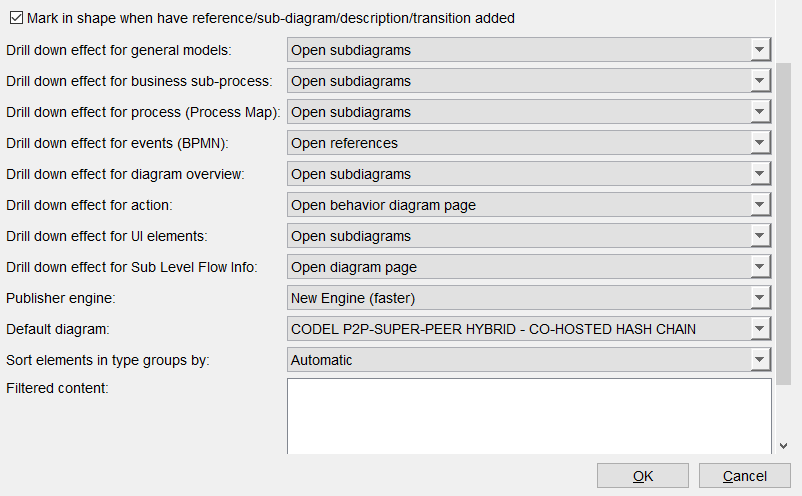 That was strange and let me check. Please be patient.

I would like to let you know the reference link not showing in published document problem had been fixed. Please update the software to latest patch build (sp1_20180215bg or later) to get the problem fixed. Details about update to latest patch can be found at

Feel free to contact me for any questions and wish you have a good day!

Good. That fixed that problem. Thankyou.

Can we turn to the Glossary links. They don’t work AT ALL.(in html output)

Confusingly, I was getting SOME response on some of the elements and couldn’t immediately see why. Just figured it out. Where I’ve included text in the element specification, that text appears at the foot of the page when I hover over the element.

If we could get similar behaviour when hovering over (or clicking on) glossary items (preferably in a floating window rather than foot of page where they can’t be seen on the longer pages) we’d be pretty close to perfect!

I’ve actually got a web developer developing a script to produce this kind of behaviour by parsing your html output but, as you can imagine, this is a painfully expensive option so we really need your software to do the job for us!

Asked my web dev to check the html code for a clue to why the glossary links have stopped working altogether and he identified the (or at least “a”) problem. Here are two arbitrary slices of html.

the “old” version contains an “href”

damn. You’ll have to take my word for it. The “new” code won’t display properly in the forum page (probably being interpreted as html. Tried a couple of tweaks including the square brackets, but no joy. In any case the whole point is that you Wouldn’t see something (the href).

and we’re using those hrefs to redirect the links to a format closer to what we need.

You’ve already seen my settings, so perhaps there’s something there I need to switch on or off.
Or else, we have another bug…

It looks like to be a different problem. Let me check and please be patient.

Sorry for the delay. I just confirmed with our engineers that we actually never support jump to, or display the description of glossary term directly in the image at the published diagram image. We do have an option called Jump to glossary grid from highlighted glossary term, but it only apply to the generated HTML content but not on diagram image. We will consider to support this in our future release. Feel free to contact me for any questions and wish you have a good day!

Rain, I’m fully aware of your limited support for the link to the Glossary grid. I was grateful when you added it back in to the patch a couple of months back.

Despite its limitations, we have created a workaround to make better use of the glossary.

That workaround depends on the links (to the grid) that you included in the update.

It is THOSE links which have gone absent and we desperately need reinstated.

One thing I’m looking at is using a trick similar to the one Roy Keung has just taught me which has allowed to me to create a working “Home” button for all my diagrams. That works beautifully.

So I’m thinking about putting an invisible object over the top of each glossary reference and embed a url in that object so that, from the users pov, they click on the glossary term and it calls up a popup window with just that term inside it. Yes, its a pain in the arse, but we desperately need proper links to the glossary and we’re prepared to put in that much effort - but hopefully we’ll only need to do that ONCE per glossary link (but see below)

I’ve noticed that you produce an individual html form for each glossary entry, and I’ve just I’ve just tested the above concept (partially) by embedding the relative link to a specific glossary form in the content folder and that works a treat. My web dev can modify it to a popup.

The question is: where can we find the relevant references?

For example the glossary term I’ve just succeeded in linking to, from my "invisible object) is Glossary_n3cgwAaGAqACRBPl.html
Where, in VP, can I find the “n3cgwAaGAqACRBPl”?

I’ve just confirmed that the references are “stable” so, presumably, they are stored somewhere in the glossary grid but I can’t find them.

The other thing I need is a bit more flexibility on your shape constraints. Ideally, I need to be able to create the invisible object to fit exactly over the glossary term

You can see the problem here:

I’ve deliberately left the outline visible so you can see the problem. The “rounded rectangle” shape cannot be made shorter than you see in the image. Is there another shape (which I can treat the same way) which can be made shorter?

In this particular case, it isn’t a big deal, but in other action boxes I can have up to half a dozen glossary terms and so I would need a much finer discrimination than your rectangle allows. In addition to which I want readers to be able to click anywhere away from the glossary term (but within the action box) to follow the reference link relevant to the box.

OK, I’ve found where you store the unique glossary refs. If I export the glossary to excel and tick all the boxes, it turns up in a worksheet called “System Data” which contains the references alongside the record number of the glossary entry. There’s probably a way to link the worksheets so that I could read the reference directly alongside the glossary term name but I’m not that much of an excel specialist. I could import both worksheets into a dbf and link them by record number but I’d much prefer to simply look them up within the software.

Is there an easy way to access the same data within VP?

I’ve also discovered that the Oval shape is better for my “hot spots” than the rounded rectangle because I can reduce it to about half the height. I have found other shapes which can be reduced even further, but they don’t include the ability to embed urls. Any way to improve on that?

The “n3cgwAaGAqACRBPl” is an internal model element ID in VP. You can access this by creating plugin using Open API (in Java). Details about the Open API can be found at

Actually, the export to spreadsheet, then merge the two worksheets into a dbf only took me about 20 minutes, whereas it looks like it would take a couple of hours just to wrap my head around the plugin. Looks like it might be useful for future projects though and I am intrigued by the approach. .

Haven’t been able to improve on the oval though. Is there a more “shrinkable” shape I can use? (bearing in mind it must still retain the functionality which allows me to attach a url to it)

I’m still awaiting a reply on this one. The oval is better (more shrinkable than the rectangle) but is still sub optimal. The rectangle is the right shape but you’ve imposed a restraint on how small it can shrink. Can you amend the class so that it can shrink (height) to the size of a line of text in the current font and width to 3 characters? Or even create a new “hotspot” class with those behaviours?