SysML: Multiple instances of one block on an IBD, confused with ports

I have a problem implementing multiple instances of a block in IBD, when trying to connect them through ports that I have defined on a BDD. 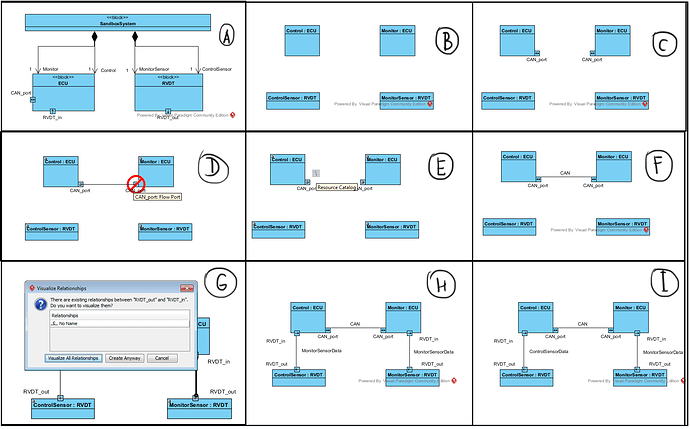 qq1655×1031 116 KB
Detailed explanation:
Let’s say, I have created a BDD, where the structure of my system is defined. It has two electronic control units (one of them is control unit, the other is monitor unit) and two RVDT sensors.
For all these blocks I have defined ports, so they could interact.
(See A)
Then I move on to defining system’s internal structure. I create an IBD, where I put instances of blocks defined in a BDD.
(See B)
First problem: I can not see the ports I have already defined. The only way I could make them appear was to drag-and-drop them from the model tree, so I finally had this:
(See C)
But when I tried to connect these two ports, VisualParadigm had a different opinion:
(See D)
For some reason, it had no problem with this when I have dragged a link from “Resourses catalog” and assigned it to be “Connector” when VisualParadigm asked me to define a link type.
(See E and F)
Then I added (drag-and-drop from the model tree) other ports. When connecting last two of them, VisualParadigm have asked me if I would like to visualize already existing relation:
(See G)
I agreed and ended up with having one connector shown in two places on a diagram, which was not at all what I intended.
(See H)
I cancelled this and made a connection again, now choosing “Create anyway”.
(See I)
It looks just the way I wanted it to be, but it bothers me that there is (obviously) still a connection between two ports, that I didn’t want to have.

Could anyone please tell me, if it’s all tool-specific or is it just my lack of expirience with SysML? I have googled extencively, but all of tutorials and literature I have found only explain how to create IBDs for systems where there is no multiple instances of a same block.
Also, is there any other than “drag-and-drop” way to see on an IBD the ports defined on a BDD? It’s fine for two ports, but if I had 20 of them, that would be too tedious.

Thank you very much.

about D
The problem is forwarded to our engineer team.
We will notify you after it is fixed.
Sorry for any inconvenience caused.

about G
The dialog tells you similar relationship is already defined.
It is used to avoid duplicate relationship being created.

about “drag-and-drop”, there is another way:

roykeung, thank you! Ctrl+Space is much more convenient.