Differents Glossary Grid in one project

Is there any way to create multiple “Glossary Grid” in one project?

Maybe it can be the same grid, but I would like to show in the document 3 differents tables with differents terms and definitions in each table.

When I try to create a second diagram “Glossary Grid”, the terms that are written on the first one, appears in the second grid too. How can I avoid this?

Thanks you so much!

I don’t see any option to add a second glossary grid but I did manage to get some results by using the ‘Nickname’ feature, this is a feature which is part of the Advanced model management toolset, see this link. Note that this is only supported by the Standard edition and up.

This option allows you to translate a model element into different languages and seemingly switch between them. This can easily be ‘abused’ to change your glossary as well: 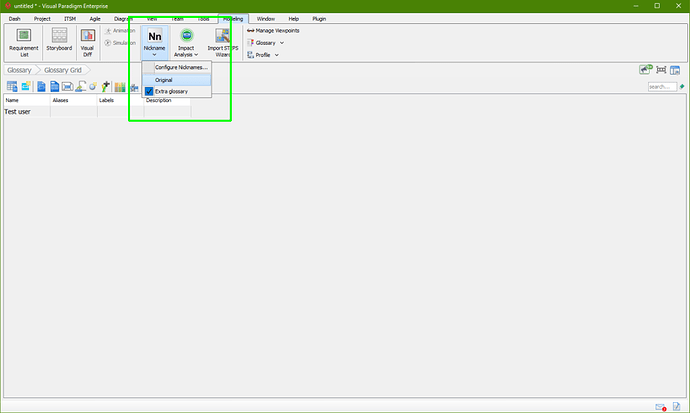 Here I added myself (‘ShelLuser’); I extracted this name from an actor in a Use Case diagram. Then I added a new nickname which I called “Extra glossary” and then renamed my glossary entry in “Test user”, you can see the results above.

While this is not fully the same as a new Glossary diagram it can mimic that behavior a bit (so I think).

Hope this can help!

There’s another interesting trick which you can use and I think it’s a lot less ‘invasive’ than nick names are: add a new grid (diagram). Preferably in a new model of its own, then be sure to set its scope to your current model only and you’d have what you require: 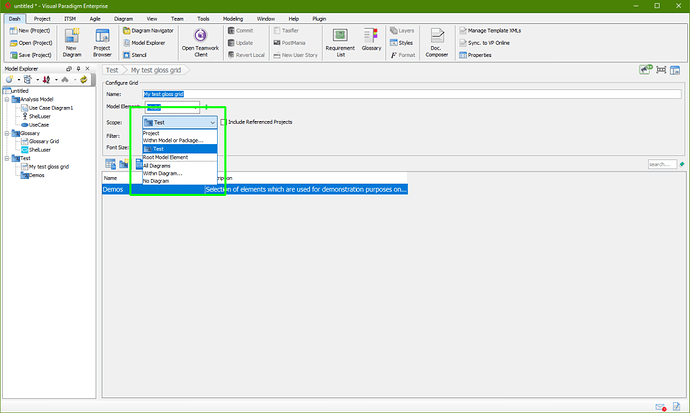 image1024×614 77.4 KB
Here I added a new model called ‘test’ in the project overview (easily seen when using the project explorer, but for demonstration purposes I also opened the model explorer pane) and then added my new grid and set the scope.

The end result is a grid which somewhat behaves as a glossary grid but of course without the same functionality (you can’t add something to this grid in the same way).

Still hope it can help.

Thank you for your reponse, I couldn’t get anything using the ‘Nickname’ feature, but I used the scope to change the terms that appears in the glossary grid table.

My doubt now is how to capture the differents options in the document. I mean, I want to introduce a little bit some terms (let’s say ‘group 1 terms’), show the table with the definition of this group 1 terms, and then do the same with another group 2 terms (write a little paragraph and show the table with the sopecific terms). Since they are in the same table, I can only show either group 1 or group 2.

Thank you so much for your help!

You can create as many Glossary Grid as your want.

Below is going to create Document as you expect.

Thank you for using Visual Paradigm.

Thank you! I see it know